Impact of Ethanol Production on the Agriculture Industry

Ethanol, a renewable fuel typically produced from Corn, has historically been highlighted by the Renewable Fuels Standard as a key enabler of meeting global renewable energy goals. In recent years however the appeal of this biofuel has waned as alternatives have come to market - benefitting from an increase in fuel cell technologies. As a result, the percentage of corn production used for ethanol has decreased.

Throughout the late-nineties to the early-aughts, the United States significantly increased its share of global Ethanol production going from 28% in 1999 to over 50% today. Many factors were at play in driving this increase - inclusive of government subsidies that distorted market economics.

While this seismic shift benefitted many who were well positioned to invest in production over in the early aughts, there has been widespread impact to both global market structure and the infrastructure brought online to support this boom 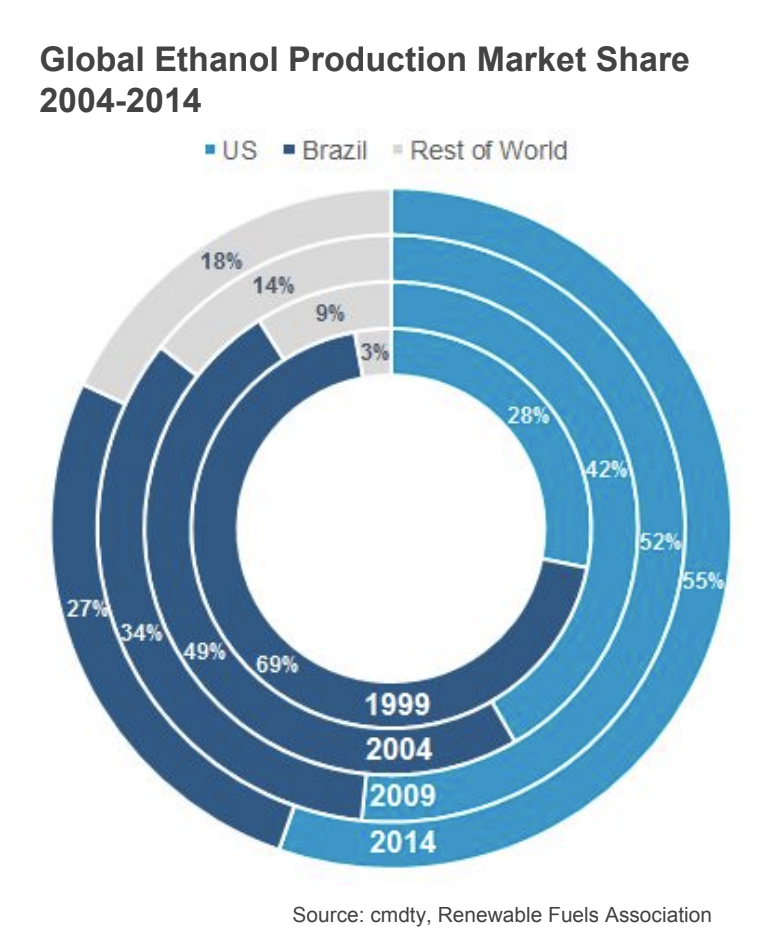 In August 2005, President George W. Bush signed the Energy Policy Act of 2005 which created minimum volume standards for gasoline/ethanol blends. This Renewable Fuels Standard (RFS1) mandated that four billion gallons of biofuel be used in 2006, and scheduled a further increase to 7.5 billion gallons by 2012.

By the time RFS2 was signed in 2007, construction to more than double production capacity from 2005 had either already broken ground or was near completion. In the year 2007 alone, 76 ethanol plants were in the process of coming online.

This boom in construction happened to coincide with a material run-up in commodity prices that saw corn prices increase from approximately $2.00/bushel at the time of RFS1’s signing, to over $4.50/bushel by the end of 2007. Some have attributed this price increase directly to the energy mandates tied to ethanol production, however analysis in the years since has not yielded a definitive answer.

While capacity was coming online through the aughts, utilization of existing capacity began to exceed what could be reasonably be expected from online infrastructure. In 2008, capacity utilization hit a maximum of 118%, which was eventually addressed by the onboarding of 4.6 billion gallons of production capacity in 2009.

Unfortunately for those that invested in this additional infrastructure, retail demand for fuel stalled out as the economic crisis of 2009 softened end-user’s eagerness to drive, and other government mandates around fuel economy standards compounded to significantly alter the growth trajectory of U.S. fuel consumption.

Previously forecasted to grow, demand for fuel shrunk to 8.7 million barrels from 9.7 million in 2007 according to the Energy Policy Research Foundation.

As a result, by the year 2013, almost 10 percent of ethanol plants in the United States had stopped production due to economics that no longer made sense - led primarily by end-user behavior that had overwhelmed the tailwinds provided by government support for ethanol.

Despite the pullback in anticipated demand for ethanol and other plant driven biofuels, the underlying production of ethanol continues to be strong and has leveled-off as opposed to an outright decline. With that said, overall U.S. corn production as a percentage of global production has declined from 1999 through to present day.

Subsequently, the percentage of U.S. corn production directed into ethanol has risen materially since the onset of RFS1 and RFS2. Historically around 5%, ethanol began accounting for over 10% of corn production in 2002, and now represents over one-third of total U.S. corn yields. 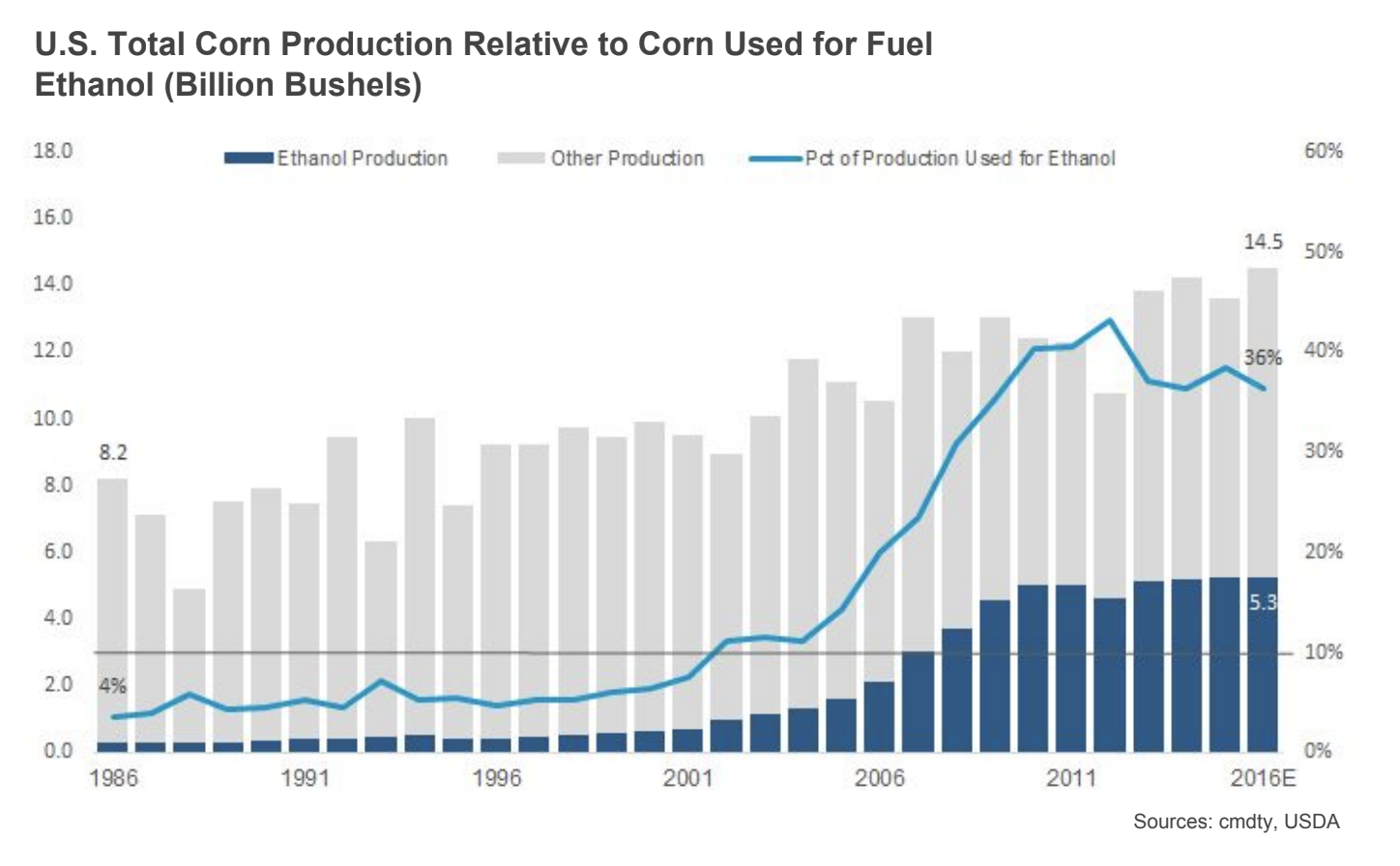 This means that while the craze over government subsidies has largely subsided, the communities that are built around corn farming still have significant exposure to the ongoings of the ethanol industry. When combined with current political trends favoring rural blue-collar workers it appears that any overt withdrawal of government-led support for ethanol is unlikely

Looking further into this market dynamic, not only do ethanol plants employ residents of rural communities, but they support all of the ancillary services that surround the industry.

These related services range from the trucking industry shipping the goods, to the banks that house funds for the plants, down to the diners that serve passersby doing business with local ethanol production facilities.

Going forward producers are keenly aware that they cannot rely on additional ethanol mandates to drive demand. While removal of current support isn’t anticipated in the near-term, the era of federal subsidies serving as the industry growth engine isn’t coming back.

These realities are combined with continual innovation in driving technologies aimed at the consumer. The success of hybrid and fully electric vehicles have had a significant impact on fuel demand for the mass affluent and early adopter segments.

As fuel cell technologies improve and gain scale of production, all-electric vehicles are expected to proliferate fully to the mass market.

Subsequently, ethanol producers will need to determine what this means for their business long-term and if the current ratio of corn production to corn used for fuel ethanol is sustainable in a new market environment.