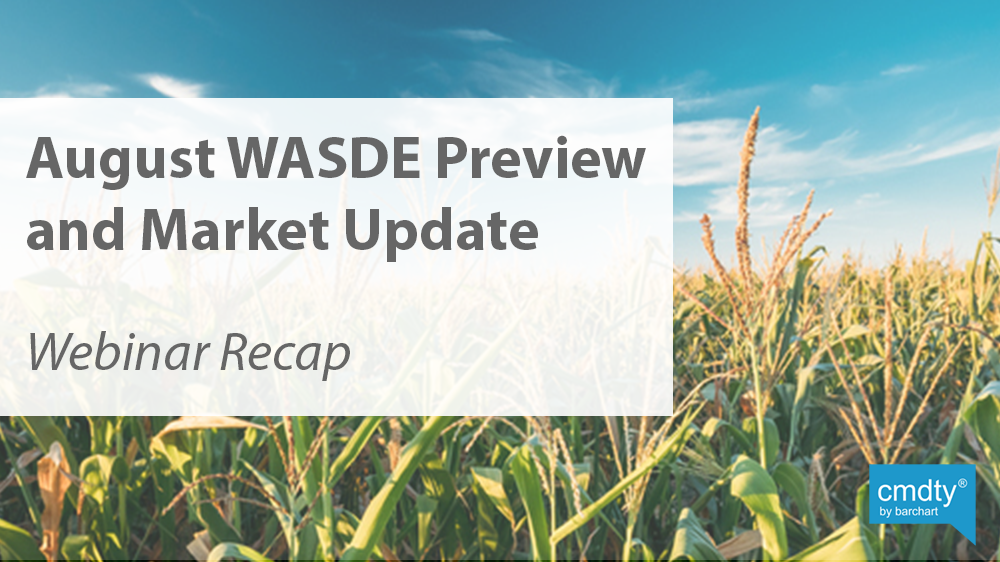 Yesterday we hosted our fourth webinar in our Grain Market Update Series which provides attendees with insight into the August 12th WASDE report. In this webinar, Barchart's Head of Commodities, Michael Browne, and Chicago Markets Bureau Chief at Meredith Agrimedia, Mike McGinnis, previewed the upcoming August WASDE report, discussed the latest cmdty Yield Forecasts, and hosted a live Q&A. Don’t worry if you weren’t able to attend - we’ll fill you in!

Mike McGinnis started off the webinar by providing an in-depth overview of macro trends in Agriculture. He mentioned that there’s been an increase in land and farm equipment sales online. While this is mainly due to COVID, it’s likely this trend will continue as when people get comfortable with buying online they continue to do so. Another trend is the decrease in ethanol demand. In recent months we’ve seen some ethanol plants either idol or closed due to a decrease in ethanol use. The U.S. Grains Council is actively trying to find other global markets to increase the demand because the ethanol industry is crucial for the corn market. The third trend he discussed is the United State’s decreasing market share in the global commodity market. For a long time we were the only corn source in the world, however this is no longer the case as Brazil has cut some of the United States corn market share. In addition, South America is a large producer of soybeans and China recently bought a record amount of soybeans from them. Mike explains that it’s critical that we work to regain some of the lost market share.

Next Michael took a deep dive into our cmdty Yield Forecasts for the August 12th WASDE release. Our official August forecasts were released publicly on Tuesday August 4th, with end of season yield at 174.8 bu/ac for corn and 49.2 bu/ac for soybeans in the U.S.. We update our grain yield estimates daily and as Michael informed the audience, we revised our estimates upward across both corn and soybeans, with our corn yield estimate now at 176.4 bu/ac and soybeans at 49.9 bu/ac. Michael proceeded to take a look at our state level yield estimates, which also showed an upward trend in several states for both corn and soybean estimates.

Michael also informed the audience on a couple ways to access our yield forecast indexes. The first is through cmdty’s free U.S. Yield Forecast Report. This report is published on the first and third Tuesday of every month and compares our previous yield estimates with our newly released figures. This report covers both the national and state levels with updates from major crop production areas.

Daily estimates are available within our commodity trading platform, cmdtyView Pro. Through cmdtyView Pro subscribers can access a geospatial representation of our yield forecast indexes as well as access to county and crop reporting district forecasts at no additional cost!

After an in-depth overview on how to access and use our yield forecasts Michael facilitated a great Q&A revolving around Mike’s extensive background. We can’t fit everything they covered in one blog post, so be sure to check out the full webinar here. Our next webinar in the livestream series will take place Thursday, September 10, 2020. Make sure you’re registered for our entire market update series to be prepared for each WASDE and Crop Production release!