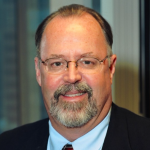 Tom Fritz is a third generation commodity futures trader. His grandfather and his father were traders on the exchange. Tom began his career in 1971 with Tabor Grain which was later acquired by Archer Daniels Midland. Prior to co-founding IFG in 1994 Tom was the lead Chicago Board of Trade floor analyst for ADM. He produces Just My Opinion, a daily grain commentary that is well respected and viewed all over the world.

Is The Spec Too Long

Is The Corn Market Too Long

Follows the Crowd For Now