The cmdty Wheat Price Index family is a series of volume weighted indexes and price assessments that represent fair value pricing for physical Wheat across the United States. The indexes are calculated on a continuous basis and use a sophisticated – but transparent - weighting process to ensure prices are objective and reflective of underlying market economics.

Calculated at the County, Crop Reporting District, State, Regional, and National level – from prices contributed by over 4,000 grain buying locations – there are over 500 different front-month indexes. With forward curves going out twelve months for each index area there are over 6,000 objective prices for Wheat calculated each day. Historical information is available through to the start of 2014.

Major growing zones are divided among the following regions:

The indexes are powered by best-in-class grain prices from the cmdty by Barchart product line. Additional prices, including basis values and forward curve information, are available exclusively to subscribers of cmdtyView® - the leading platform for commodity trading – or other data products available through cmdty.


Wheat traded in both directions on Friday. KC HRW futures closed with 3 to 4 3/4 cent losses. HRS wheat was fractionally mixed to 1 1/4 cents lower. SRW wheat was higher on the day, with 8 to 9 1/2 cent gains in the front months. SRW to corn premium was at a monthly high. September SRW to Sept HRS premium was the highest since April 28, and the Chi to KC spread was the highest premium since December 10. USDA announced a private export sale of 190k MT HRS and 130k MT of HRW to China this morning. The NASS wheat production numbers were bullish relative to June, and exceeded trade expectations. USDA’s July estimate for winter wheat production is 1.218 bbu, down by 48 mbu, while the trade was looking for an 18 mbu cut. That came via a 33 mbu cut to HRW and a 17 mbu cut for SRW production. Spring wheat production was estimated at 550 mbu, which was above the trade average guess of 546. In total 2020/21 U.S. wheat production is forecasted at 1.824 bbu. U.S. ending stocks for 2020/21 are f... Read more

SRW Wheat Baisis: Don't Assume
by cmdty Update with Darin Newsom - Sun Jul 12, 4:14PM CDT
If I were to tell you the more active futures contract rallied 42 cents last week, while the underlying cash commodity was halfway through its latest harvest, the assumption would be basis took a beating on its weekly chart. Well, we need to remember what Coach Buttermaker famously told the Bad News Bears about assume, for the market I’m talking about is soft red winter (SRW) wheat, and national average basis took anything but a beating last week. Friday afternoon saw the cmdty National SRW National Basis Index (SRBI, weighted national average) calculated at roughly 13 3/4 cents under September Chicago futures, up about 1/2 cent for the day and roughly 2 cents stronger (yes, 2 whole cents) for the week. Fundamentally there certainly seems to be something brewing in the SRW wheat market given the explosion in basis and the action in futures spreads. The July (in delivery)-September spread rocketed to an inverse of 1 3/4 cents while the September-December spread saw its carry trimmed to 5 cents, covering roughly 28% of calculated full commercial carry. Recall from previous discussions I consider 33% or less bullish, with an inverted spread reflecting an extremely bullish supply and demand situation. There has been a great deal of talk recently about production decreases in Russia, Ukraine, and Argentina. While USDA did not acknowledge this situation in its most recent WASDE report (released last Friday), futures spreads and the SRBI indicate the concern is real. This could work in the favor of U.S. wheat producers as they head down the homestretch of the 2020 harvest over the coming weeks. Darin Newsom President Darin Newsom Analysis Inc.
Cash Soybeans: Residual Use
by cmdty Update with Darin Newsom - Sat Jul 11, 5:51AM CDT
Those of you paying attention to USDA July round of Supply and Demand reports likely noticed some of the oddities in the soybean numbers. First and foremost, USDA upped its 2019-2020 ending stocks guess to 620 mb, an increase of 35 mb from June, but still well short of what my analysis of the marketing year daily average for the cmdty National Soybean Price Index (NSPI, weighted national average cash price) is indicating. Let’s just say USDA’s latest guess, combined with its estimate of old-crop demand of 3.857 bb put ending stocks-to-use at 16.1%. Using the daily average price for the NSPI through the end of June puts my calculation of ending stocks-to-use at 33.5%. Okay, so maybe my analysis hyper-bearish conclusion is way out there but consider this. Based on USDA’s own Quarterly Stocks number from June 30 (stocks on hand as of June 1) of 1.386 bb, applying average Q4 demand brings 2019-2020 ending stocks in at about 810 mb. Additionally, I had to laugh at USDA dropping its residual use demand category by 50 mb, to (-46 mb), to make its July adjustment. Never mind that exports are still projected to come up at least 100 mb short of USDA’s standing demand guess of 1.65 bb, with last Thursday’s weekly update (for the week ending July 2) showed total export shipments just short of 1.4 bb with only 8 reporting weeks remaining. That seems to be a lot to ask, particularly with national average basis not indicating demand is skyrocketing this late in the marketing year. Darin Newsom President Darin Newsom Analysis Inc.
Corn Basis: Mid-Summer Tales
by cmdty Update with Darin Newsom - Thu Jul 9, 3:38PM CDT
This week I’ve had the opportunity to visit with a number of producers from across the U.S. Southern Plains and Midwest, with the most popular topic being that of corn basis. The most amusing, if one wants to use that word, were the stories (yes, more than one) of long, harvest-like lines filled with trucks moving last year’s crop ahead of this year’s harvest. Yes, this often happens in late July and early August, but everything is running ahead of schedule when it comes to corn this year. Despite the early pre-harvest rush, national average basis continues to hold firm with the cmdty National Corn Basis Index calculated at 24 3/4 cents under September futures Thursday afternoon. This was fractionally stronger than Wednesday’s calculation, and 1/4 cent stronger that the previous Thursday’s figure, indicating next week’s export inspections (Monday) and shipments (Thursday) could be firm once again. Speaking of exports, a producer from southwest Kansas told me how an ethanol plant in his area had a stronger basis bid for milo (grain sorghum) than corn, due in large part to the strength of the U.S. export program to China this marketing year. In the latest weekly government update, U.S. milo exports were 132.4 mb, almost 2.5 times greater than last year’s 54.9 mb for the same week. By percentage, this makes U.S. milo the most improved year-to-year exported grain. It will be interesting to see how long this torrid pace continues, with the 2020 harvest approaching. By percentage, milo continues to be the marketing year-to-marketing year leader in percent gain in the export shipment game. Darin Newsom President Darin Newsom Analysis Inc.
cmdtyView®

Get all of our commodity data and prices in cmdtyView.

All of our exclusive data and prices are available through the cmdtyView terminal - a fully web-based and responsive commodity trading platform that works seamlessly across all of your devices. 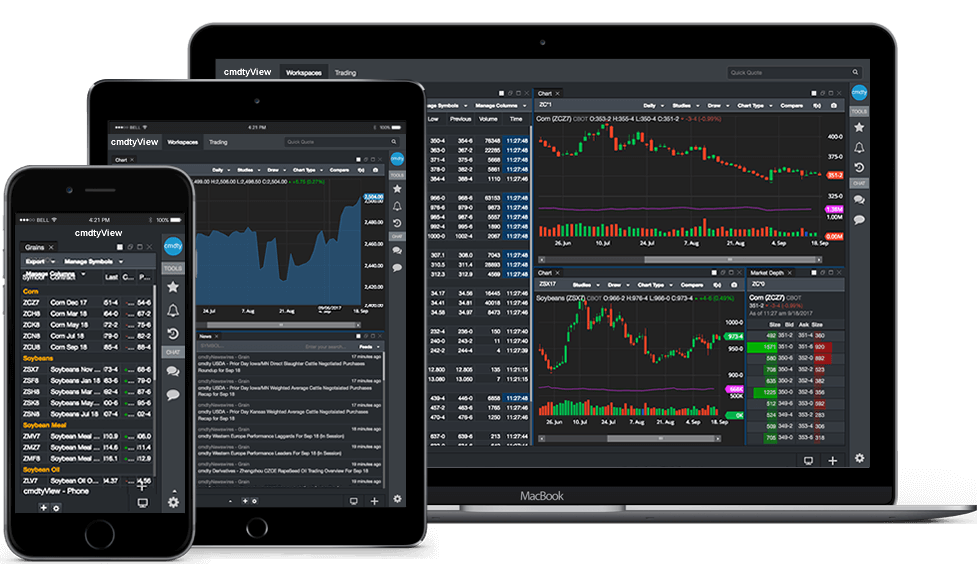 The cmdty Wheat Prices and Indexes page highlights price data for those interested in physical grain trading. Our assessment methodology uses a sophisticated - but transparent - weighting process to ensure our prices are objective and reflective of underlying market economics. By combining price with capacity and throughput, cmdtyIndexesSM is the only source for grain pricing that isn’t just “average.”

We calculate continuous and end-of-day price and basis levels for individual counties up to our benchmark National Index – historical data is available from 2014.